Ever thinking of reclaim the used engine oil to diesel and base oil?

Distillation is one of the most important thermal separation methods used in crude oil processing and separation as well as waste oil reclamation.

Below are the technology trend

In a Thin Film Evaporator the raw material is heated up on the internal surface of a heated tube until the lower boiling component starts to evaporate. These vapors are then liquefied on the cold tubes of a condenser. In Thin Film Evaporator design the condenser is located outside but as close to the evaporator as possible. Residence time in Thin Film and Short Path Evaporators is only few seconds, which helps to avoid thermal decomposition of the product. Thin Film Distillation is a continuous and single pass technology where not require to process for multi passes

Positioning the condenser within the evaporator allows a further reduction of operational pressure down to vacuum 0.001 mbar as compare to 1 mbar in thin film evaporators. The stronger vacuum further reduce the temperature for oil boiling and avoid the issue of thermal decomposition. This is due to the fact that a pressure gradient from evaporator to condenser essentially can be avoided. Vaporized particles have a realistic chance to directly arrive at the condenser without colliding with other particles.

The geometrical distance between the evaporator and the condenser is in the range of few centimeters which is comparable with the mean free path lengths in this pressure range.

In extension to the distillation output of base oil, ES offer of Reactivated Oil Polishing plant which is another innovation from oil regeneration process, this will further improve the quality of oil by improving oil colour and reducing acidity and absorbing fine impurity. The advantage of this process is the raw material, activated clay used for the polishing process can be reactivated over 300 times. This has substantially increase the life span of the activated clay from originally 1 weeks to 2 years 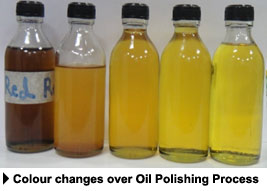 All the above costing is saved to occurrence only once in 2 years with the Reactivated Oil Polishing Plant. With the input of this technology, the process cost per litre of base oil output become very low and resulting the ROI for the investment become viable and short.

Design and delivery:-
System will be built in modular design so that it can be easily transport and assemble at site

Modular design that can be easily assemble in the site.